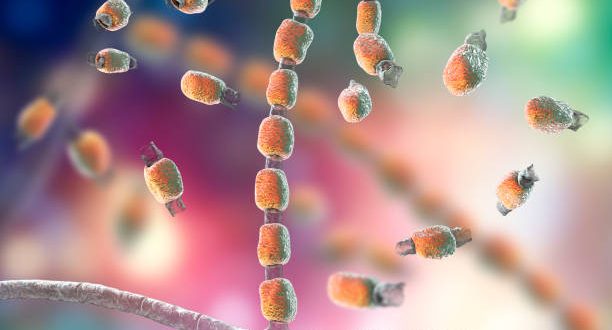 The fungi constitute a group of living organisms devoid of chlorophyll. They resemble simple plants in that, with few exceptions, they have definite cell walls, they are usually nonmotile, although they may have motile reproductive cells, and they reproduce by means of spores.

A spore (Gr. spora = seed, spore) is a minute, simple propagating unit without an embryo that serves in the production of new individuals of the same species.

The filaments constituting the body (soma) of a fungus elongate by apical growth, but most parts of an organism are potentially capable of growth. So, a minute fragment from almost any part of the fungus is able to produce a new growing point and to start a new individual.

Reproductive structures are differentiated from somatic structures and exhibit a variety of forms, on the basis of which we classify the fungi. Few fungi can be identified if their reproductive stages are not available.

Holocarpic Fungi: In the formation of reproductive organs, either sexual or asexual, the entire thallus in some fungi may be converted into one or more reproductive structures, so that somatic and reproductive phases do not occur together in the same individual. Fungi that follow this pattern are called holocarpic (Gr. holos = whole, karpos = fruit).

In biotrophic species such as Olpidium and Synchytrium (members of Chytridiomycota), where the whole thallus is contained within the host cell, there is no differentiation into a vegetative and a reproductive part. At maturity the entire structure, except for the wall which surrounds it, is converted into reproductive units, i.e. zoospores, gametes or resting sporangia.

Eucarpic Fungi: In the majority of fungi, the reproductive organs arise from only a portion of the thallus, while the remainder continues its normal somatic activities. The fungi in this category are called eucarpic (Gr. eu = good, karpos = fruit).

The holocarpic forms are, therefore, less differentiated and less usual than the eucarpic ones.

Eucarpic thalli may have one or several sporangia and are then termed monocentric or polycentric, respectively. In some species, there are both monocentric and polycentric thalli, so that these terms have descriptive rather than taxonomic significance.

A further distinction has been made, especially in monocentric forms, between those in which only the rhizoids are inside the host cell whilst the sporangium is external (epibiotic), in contrast with the endobiotic condition in which the entire thallus is inside the host cell.

In general, asexual reproduction is more important for the propagation of the species because it results in the production of numerous individuals, and particularly since the asexual cycle is usually repeated several times during the season, whereas the sexual stage of many fungi is produced only once a year.

Asexual reproduction can be defined as any method of propagation of new individuals, such as simple division of an unicellular organism into daughter cells, or of a multicellular thallus into a number of fragments each of which grows into a new individual.

It is this broader concept of asexual reproduction that we are using here. In accordance with this concept the asexual methods of reproduction commonly found in fungi may be summarized as follows: (1) fragmentation of the soma, each fragment growing into a new individual; (2) fission of somatic cells into daughter cells; (3) budding of somatic cells or spores, each bud producing a new individual; and (4) production of spores, each spore usually germinating to form a germ tube that grows into the mycelium.

Arthrospores: Some fungi employ fragmentation of hyphae as a normal means of propagation. The hyphae may break up into their component cells that behave as spores. These spores are known as arthrospores (Gr. arthron = joint + spora = seed, spore)

Arthrospores are primitive kinds of spores. Such spores are formed in Galactomyces spp. (formerly called Endomyces) and occasionally formed in Schizosaccharomyces japonicus, in Geotrichum.

Chlamydospore: A chlamydospore (Gr. chlamys = mantle + spora = seed, spore) is the thick-walled large resting spore of several kinds of fungi, including Ascomycota such as Candida, Basidiomycota such as Panus. It is the life-stage which survives in unfavorable conditions, such as dry or hot seasons.

Chlamydospores are usually dark-coloured, spherical, and have a smooth (non-ornamented) surface. They are multicellular, with cells connected by pores in the septae between cells.

e.g. seen in the fungi Fusarium.

Fragmentation may also occur accidentally by the tearing off of parts of the mycelium through external forces. Such bits of mycelium under favorable conditions will start a new individual. Often in the laboratory we employ mycelial fragmentation to keep fungal cultures growing on artificial media by transferring a bit of mycelium to fresh media and thus starting a new colony.

Fission, the simple splitting of a cell into two daughter cells by constriction and the formation of a cell wall, is characteristic of a number of simple organisms including some yeasts, which are true fungi.

Budding is the production of a small outgrowth (bud) from a parent cell. As the bud is formed, the nucleus of the parent cell divides and one daughter nucleus migrates into the bud. The bud increases in size while still attached to the parent cell and eventually breaks off and forms a new individual.

Chains of buds, forming a short mycelium, are sometimes produced. Budding takes place in the majority of yeasts, but it also occurs in many other fungi at certain phases of their life history or under certain conditions of growth.

The most common method of asexual reproduction in fungi is by means of spores. Spores vary in color from hyaline”‘ (Gr. hyalinos = made of glass, transparent, i.e., colorless) through green, yellow, orange, red, brown, to black; in size, from minute to large: in shape, from globose through oval, oblong, needle-shaped to helical; in number of cells, from one to many; in the arrangement of cells; and in the way in which the spores themselves are borne.

Some fungi produce only one type of spore, whereas others produce as many as four types. Fungal spores produced asexually are either borne in sporangia (sing, sporangium; Gr. spora = seed, spore, angeion = vessel) and are then called sporangiospores, or are produced at the tips or sides of hyphae in various ways and are then called conidia (sing, conidium; Gr. konis = dust).

A sporangium is a sac-like structure whose entire contents are converted through cleavage into one or more, usually many, spores. Sporangiospores may be motile or nonmotile.

Propulsion by flagella is often coupled with chemotactic movement, zoospores having the ability to sense chemicals diffusing from suitable substrata and to move towards them, or gametes detecting and following extremely low concentrations of hormones. In some cases oxygen or light are also stimuli for tactic movement. The fungal groups which possess flagella are mostly aquatic or, if terrestrial, rely on water for dispersal or infection.

In zoospores, there are at least two types of flagella; the whiplash and the tinsel. The whiplash flagellum is divided into two parts. The lower or basal portion is much longer than the upper or terminal portion, which is usually very short and flexible. The tinsel flagellum is a feathery structure consisting of a long rachis with lateral hair-like projections termed mastigonemes or fllmmers on all sides along its entire length.

2 types of zoospores are present.

Aplanospore: If the asexual reproductive spores produced from a sporangium are nonmotile, they are called aplanospores (Gr. a = not + planetes = wanderer, spora = seed, spore). They are commonly seen in members of Zygomycota, especially in Mucorales.

Currently in 4th year (Hons) in the Department of Botany, University of Dhaka. Planned to have multiple careers one by one but promised to be with 'Plantlet' as long as it's primary stage remains unfinished. Email: abulaisshomrat@gmail.com. Minimum monthly resolution - Publish (1), Revise (3), Share (5)
Previous Pollination: Introduction, Types and Conditions
Next Fungi: Sexual Reproduction

Nice to read💙. Some valuable points 🧡💙