iii. Fungi as a biofertilizer potential: Application of Tricoderma hamatum or Trichoderma koningii has been reported to result in a nearly 300% plant yield increase in some greenhouse experiments. Trichoderma harzianum T22 has been shown to increase root development in maize and other plants, and this may last for the entire lifespan of annual plants and can be induced by adding small amounts of fungal conidia to seeds. Such addition can result in an increased yield and biomass, as well as an increased drought tolerance.

iv. Bio-pesticides: Chemical pesticides are often very toxic to many non-target organisms, including the natural enemies of the pests and also to humans. The elimination of natural enemies may allow outbreaks of secondary pests, and rapid resurgence of the target species, once the pesticide loses its activity.

v. Fungal insecticides (Mycoinsecticide): Control of arthropod or other invertebrate pests by fungi .

1. Boverin: Beauveria bassiana (Hyphomycetes): Conidia of the fungus are now mass-produced as a preparation called Boverin, and have been used in Russia since 1965 to control the Colorado potato beetle (Leptinotarsa: Coleoptera).

2. GreenGuard / Green Muscle: Metarhizium anisopliae is also now used for biocontrol of locusts and grasshoppers in Australia.  It is produced by Australian Seed Inoculants Pyt. Ltd. under the trade name ‘GreenGuard’.

A4. Trichoderma viride both parasitizes the hyphae of many other fungi and produces an antibiotic. This double-barreled approach allows it to deal effectively with soil pathogens such as Rhizoctonia solani that causes a variety of diseases on many hosts and Armillaria mellea, which kills many species of trees.

6. Myconanotechnology: Nanoparticles are metal particles smaller than 100 nm that can be synthesized in numerous shapes (e.g. spherical, triangular, rods) from various metal ions. Nanoparticles have many different applications and are used in a number of fields, including medicine, pharmacology, environmental monitoring and electronics (Liu, 2006).

Myconanotechnology (myco = fungi; nanotechnology = the creation and exploitation of materials in the size range of 1–100 nm.) Fungi have a number of advantages for nanoparticle synthesis compared with other organisms, particularly as they are relatively easy to isolate and culture, and secrete large amounts of extracellular enzymes (Mandal et al., 2006). Many of the proteins secreted by fungi are capable of hydrolyzing metal ions quickly and through non-hazardous processes. As a result, fungi have the potential to produce nanoparticles faster than some chemical synthesis methods.

This group includes the well known fungi such as Verticillium, Phytophthora, Rhizoctonia and Pythium.

These organisms penetrate the plant and decompose the living tissue, creating a weakened, nutrient deficient plant, or death.

The pathogenic fungi is usually the dominant organism in the soil.

i. Stain in wood: Stain in wood caused by bacteria or moulds with develop as dark-coloured growth is generally superficial and may be easily brushed or planed off. The wood may take different shades of blue, black and brown.

(3)Root and butt-rot caused by Heterobasidion annosum (Aphyllophorales, Basidiomycotina), an aggressive parasite that infects cut stumps, spreads from root system to root system and kills many different conifers, was the subject of nearly 600 publications between 1960 and 1970.

ii. Food spoilage: Food become unappealing only when fruiting of fungi are seen on the surface.

(1) Cereals and nuts: Rice, often moulded by species of  Aspergillus or Penicillium; and rice stained yellow by P. citrinum, P. islandicum and P. citreoviride often contains mycotoxins. Corn and winter wheat in the field are threatened by Fusarium graminearum, the source of vomitoxin.

Wheat in storage is sometimes spoiled by members of the Aspergillus glaucus series, by A. candidus, A. flavus, A. ochraceus, and by some penicillia. Some field moulds are notorious mycotoxin producers Fusarium spp. produce zearalenone, T-2 toxin and vomitoxin. Some storage moulds that attack grain and nuts are equally infamous- Aspergillus flavus and A. parasiticus produce aflatoxins.

(2) Bread: People of Lin Xian in China preferred the spicy taste of mouldy bread, but this produced oesophageal cancer in 25% of the population. The commonest moulds on bread are: Rhizopus stolonifer, with black pinhead sporangia; Penicillium expansum and P. stoloniferum with Green-spore Aspergillus niger with black-spore, Neurospora with pinkish spore.

Mycotoxins may play no direct role in the metabolism of the fungi that produce them, but in an situation where a fungus and an animal are competing for a grain of corn, mycotoxins may have evolved as powerful weapons that help the fungi to deter or destroy the competition. Is aflatoxin a weapon in the battle for food?  Mice could be serious competitors for peanuts but aflatoxin might be an effective means of excluding them.

Sources and their role on human and animal health-some kinds of vegetable, grains in storage and soy sauce may also contain aflatoxin.

iii. Alkaloids of ergot : Ergots, the overwintering sclerotia of Claviceps purpurea, which replace the grains of the host grass, commonly rye.

These sclerotia contain alkaloids: Ergotamine tartrate is useful in the management of migraine. It reduces the diameter of the cranial arterioles, thus reducing pulsation pressure and the attendant headache.

The conditions/ symptoms develop with these alkaliods is known as ergotism, Suffers-those human eat bread made from grain contaminated with sclerotia of the ergot fungus and grazing livestocks those eat infected overies of wild grasses during fruiting. We have become aware of most mycotoxins and their insidious effects only since 1960, but the ergotism has been known for thousands of years.

iv. Furanoterpenoids: Mouldy Sweet Potato Toxicosis Cattle fed sweet potatoes affected by Fusarium solani storage rot develop acute symptoms of respiratory distress, and may die (in New Guinea). The disease affects only the lungs, which become swollen and congested, with scattered haemorrhages. It has been found that 4 furanoterpenoids toxins are responsible for this condition.

1. Tinea versicolor: A fungus infection that commonly affects the skin of young people, especially the chest, back and upper arms and legs. This fungus produces spots that are either lighter than the skin or a reddish-brown.

3. Tinea unguium or Onychomycosis : Fungal infection of the nails known as Tinea unguium or onychomycosis. It is estimated that between 2% and 14% of the population in America has fungal nail infections. Trichophyton rubrum tends to cause chronic infections of toenails so the host produces infective material for years.

5. Dandruff and Seborrhoeic Dermatitis : The most common cause of dandruff is a basidiomycetous yeast called Malassezia globosa.

Micrograph showing a mycosis (aspergillosis). The Aspergillus (which is spaghetti-like) is seen in the center and surrounded by inflammatory cells and necrotic debris (black spots).

This Article is completely based on by the lecture of Dr. Abul Bashar, Professor, Department of Botany, University of Dhaka.

A girl with a lot of dreams to accomplish and make her parents proud. Currently studying in 1st year of B.Sc in University of Dhaka. Want to walk with Plantlet a long way. Interested with debate, music, photography and poem recitation.
Previous Anomalous Secondary Growth
Next Importance of Fungi part I 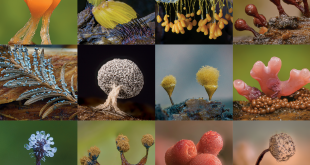