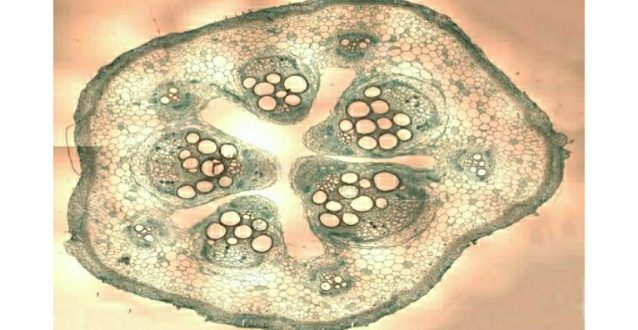 Anomalous secondary growth” is the term under which have been grouped cambial conformations, cambial products, and cambial numbers which differ from the most common “normal” condition, namely, a single cylindrical cambium that produces phloem externally and xylem internally.

In this article, Anomalous secondary growth, it’s causes and position will be discussed briefly.


These are described as follows:

In this case, the position of cambium is anomalous but the activity of cambium is normal. e.g. Serjania sp. Here secondary growth occurs due to the anomalous position of cambium. A very peculiar structure is noticed in Serjania, a climber of family Sapindaceae, where the cambium from the very beginning occurs in separate strips, each strip having primary xylem towards the center and primary phloem towards the periphery. It thus appears like a deeply-lobed compound structure made of several stems fused together. With age and consequent development of periderm the compound structure becomes more marked. The development of interfascicular cambium and its union with fascicular ones result in the formation of separate cambium rings. In fact, there is a large central stele, surrounded by a few peripheral ones.

2. Accessory cambium formation and its activity

Sometimes when the normal cambium starts to cutting cell at several places irregularly and forms at certain places much larger portion of xylem and a ridge and furrowed xylem cylinder produced. This may be of simple structure or very complex. e.g. Bignonia sp.

Secondary growth occurs in herbaceous woody liliflorae (Aloe, Agave). In Dracaena and other groups of monocot (Cheadle 1937), the meristem concerned with this growth is called cambium. The cambium originates in the parenchyma outside the vascular bundles. This part is identified as cortex.

Dracaena shows anomalous secondary growth where the cambium appears in the parenchyma cells outside the vascular bundle. This region in which cambium appears identify as cortex. These newly formed cuts cells towards outside and inside both. The tissue develops in the inner side of
the cambium is differentiated into secondary vascular bundle remain separated by each other by lignified cell.