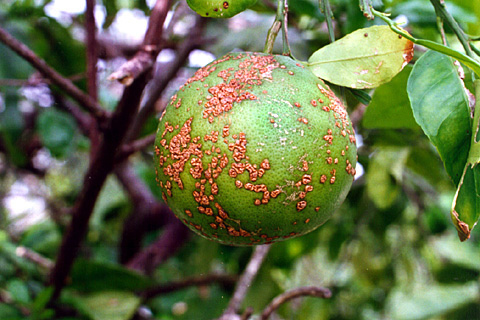 When the inoculum starts procuring nutrients from the susceptible tissues of the host, the infection starts. This is the first stage from where the disease starts to develop.

As the pathogen devours soluble products from the cell, various symptoms start appearing. Discolorness, malformation, necrotic areas are common in the infected portion of the host plant. Interestingly, symptoms may change continuously from the moment of their appearance until the entire plant dies or they may develop up to a point and then remain more or less unchanged for the rest of the growing season.

The time interval between inoculation and the appearance of disease symptoms is called the incubation period.

Invasion
Various pathogens invade hosts in different ways and to different extents. Some fungi, such as those causing apple scab and black spot of rose, produce mycelium that grows only in the area between the cuticle and the epidermis (subcuticular colonization).

Others, such as those causing powdery mildews, produce mycelium only on the surface of the plant but send haustoria into the epidermal cells.

Fungi that cause vascular wilts invade the xylem vessels of plants.

Colonization
Colonization starts when disease or the pathogen starts spreading in the host. Most of these pathogens, whether inducing a small lesion, a large infected area, or a general necrosis of the plant, continue to grow and branch out within the infected host indefinitely so that the same pathogen individual spreads into more and more plant tissues until the spread of the infection is stopped or the plant is dead.

In some fungal infections, however while younger hayphae continue to grow in new healthy tissues, the older parts of the hyphae die out. Thus the disease spread exponentially as more fragments of the hypahe are in action.

Fungi causing vascular wilts, in turn, get benefit from the xylem vessel. They disperse their spores and hyphal fragments throught the water conducting tissues and attack new susceptible parts of the plant.

Dissemination of the pathogen

Some pathogens which have motile stages such as nematodes, oomycetes, zoosporic fungi, and bacteria can easily disseminate very short distances on their own power. Fungal hyphae can grow between tissues in contact and sometimes through the soil toward nearby roots for a few to may centimeters. Both of these means of dissemination are quite limited. However, there are some fungi which can expel their spores up to a few centimeter in the wind above their sporophores. 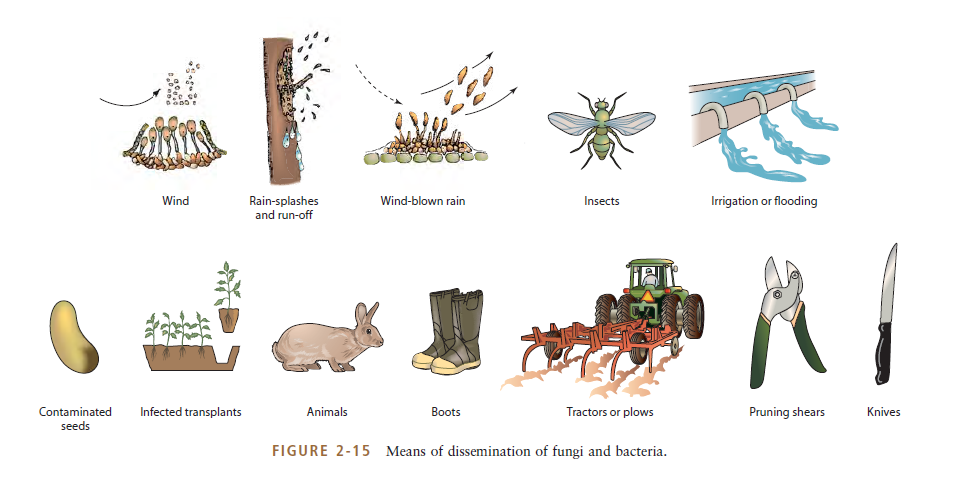 Dissemination by air: Spores of most oomycetes and most fungi and the seeds of most parasitic plants are disseminated by air currents that carry them as inert particles to various distances.

Dissemination by water: Water is important in disseminating pathogens in three
ways.

Dissemination by insects, mites, nematodes and other vectors: Insects, particularly aphids, leafhoppers, and whiteflies, are by far the most important vectors of viruses, whereas leafhoppers are the main vectors of mollicutes, fastidious bacteria, and protozoa. Each one of these pathogensis transmitted, internally, by only one or a few speciesof insects during feeding and movement of the insect vectors from plant to plant.

Dissemination by humans: Human beings disseminate all kinds of pathogens over short and long distances in a variety of ways. Such as:

Currently in 4th year (Hons) in the Department of Botany, University of Dhaka. Planned to have multiple careers one by one but promised to be with 'Plantlet' as long as it's primary stage remains unfinished. Email: abulaisshomrat@gmail.com. Minimum monthly resolution - Publish (1), Revise (3), Share (5)
Previous Inoculation and Penetration
Next Overseasoning of Pathogens