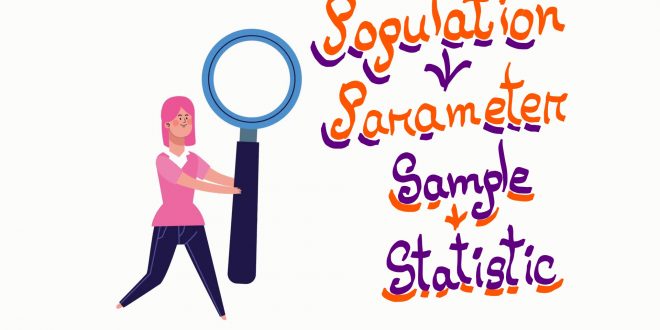 In statistics, a population is a set of homogeneous items or events that is of interest for some question or experiment.


Example: Birth weights of all babies in a particular hospital in month May, the monthly expenditure of non-residential students of 2nd year in Department of Botany, etc.

A sample is a smaller group of members of a population selected as a representative of the population.

Selecting samples being unbiased is called random sampling. A very important feature of a good study is that the sample is randomly selected from the target population. Randomly means that every member of the target population has an identical chance of being included in the sample. In other words, the method you use for selecting your sample can not be biased.

It’s important because if you select your subjects in a biased way, then your results will also be biased. And more likely, it wouldn’t represent the population.

Suppose you’re making a phone survey on the job satisfaction of Bangladeshis. If you call them at home during the day between 8 a.m. and 5 p.m. you’ll miss out on all those who work or has a job during the day; it could be that day workers are more satisfied than night workers.

Or your boss told you to make a survey of the overall development of the office from the year 2010 to 2020. To make your boss happy while sampling you chose the things as samples that actually developed but didn’t count those which almost remained the same or demoted in 10 years.

Like the above-mentioned examples, there are many ways of being biased. To get a good survey it’s necessary to avoid all kinds of biasness possible.

You want to calculate the percentage of female versus male shoppers at a department store. So on a Saturday morning, you place data collectors at each of the store’s four entrances for three hours, and you have them record how many men and women enter the store during that time.

1. Why collecting data at the store on one Saturday morning for three hours can cause bias in the data?

Ans: E. All of these choices are true.
Bias is systematic favoritism in the data. You want to get data that represents all customers at the store, irrespective of what day or what time they shop, whether they shop in couples or alone, and so on. You can’t assume that the people who shopped during those three hours on that Saturday morning are representative of the store’s total clients. This sample wasn’t drawn randomly — everyone who walked in was counted.

Parameter is a summary value that describes the population such as its mean, variance, correlation coefficient, proportion, etc.

Statistic is a summary value that describes the sample as its mean, standard deviation, standard error, correlation coefficient, proportion, etc.

The value is calculated from the sample and is often applied to the population but may or may not be a valid estimate of the population.

There is a good reason that the population parameter and sample static will vary; hopefully very little but can be significant too if the sample is biased or too small (i.e. doesn’t represent the population properly).

Q&A
You’re assigned to a job where you have to know what percent of all households in a large city has a single woman as the head of the household. To calculate this percentage, you survey 200 households and determine how many of these 200 are headed by a single woman.

1. Ans: All households in the city.

The sample is a portion or subset drawn from the entire population you’re interested in studying. In this inference, the sample is the 200 households selected out of all the households in the city.

3. Ans: The percent of households headed by single women in the city.

A parameter is some characteristic of the population. Because studying a population directly isn’t generally possible, parameters are usually estimated by using statistics (numbers calculated from sample data).

4. Ans: The percent of households headed by single women within the 200 selected households.

I'm a student of department of botany at University of Dhaka. I'm learning a lot of new interesting things about different spheres of botany and I'll keep updating about them to keep your knowledge of nature enriched. Email: tarannum28@gmail.com Minimum monthly resolution: Publish(3), Revise(2), Share(5)
Previous Adaptation of Hydrophytes & Xerophytes
Next Introduction to Biostatistics: Scope, Variable & Data

This was ”easy to understand” type of article. Hope to see more like this.

Thanks a lot for your precious feedback.