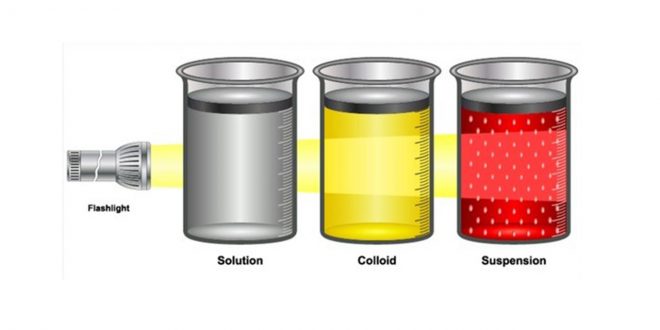 Chemistry is about combining different substances. Sometimes combining substances can cause a chemical reaction and bonding. This creates an entirely new substance called a compound. However, sometimes when there is no chemical reaction or bonding, it forms only a mixture. A mixture is made when two or more substances are combined, but not chemically. General properties of a mixture:

In case A (Solution)

In case B (Suspension)

Three of them are:

Scientist Graham in 1861 first used the term ‘colloid’ to describe glue-like preparation such as a solution of certain proteins and liquid preparation of vegetable gums. Gk. ‘kola’ means glue and ‘eidos’ means like.

But protoplasm isn’t a true solution. It is a complex colloidal solution. The consistency of protoplasm is both of a sol and gel type. The cell membrane seems to be more gel-like in nature. However, both these forms are not static but constantly changing.

Colloidal dimension in liquid can be classified into two general classes.

If the solvent is water, the solution is either hydrophobic or hydrophilic.

The starch solution is sticky.

Why do colloids not settle down?

Because the surrounding constantly strike them Also they are much smaller than water molecules. In rapid motion, they are small enough that the random velocities of the impacting water molecules do not average out. At a given moment there is a high probability that a colloidal particle is bombarded more strongly on one side than on the opposite side. When we observe colloidal particles in a light microscope by strong illumination on one side, they appear as points of light (Tyndall effect). They seem to dance around with many random hops per second. The largest (brightest) particles dance less than the smaller (dimmer) particles.

This is the Brownian movement. It is a beautiful, even spectacular confirmation of the kinetic theory. This erratic and continuous motion keeps colloids from settling.

With slightly larger particles, there is a much greater chance that the random bombardment on any side will approach an average value for the entire particles. In the contest between kinetic bombardment and gravity, gravity wins, so the particle settles.

Many particles in a cell, including the ribosomes and all the single protein molecules that are enzymes, are in the colloidal size range.

Because of the small size of the colloidal particles, their total surface in a given volume is relatively huge. The reactions of life occur on surfaces, and it is easy to see how relatively large surfaces can exist in a single cell.

The smaller the radius of curvature of the meniscus, the tighter the water is held to the colloidal or other hydrophilic surfaces by hydration, and the more negative the matric potential.

Under certain conditions, the sol may change into another form having a semi-solid consistency. We call it gel. And the name of the process is Gelation. During this process, the two phases of the sol become reversed in a gel.

Emulsion is a kind of colloidal system.

Dispersion of small drops of one liquid in another liquid with which it is immiscible is called an emulsion. We can easily prepare it by mixing a few drops of oil into the water in a test tube and shaking it well. However, this emulsion will be unstable because after some time the tiny oil drops will coalesce together to form a separate layer. The dispersed phase is small in quantity. An emulsion is an unstable solution. We can shake it to make it unstable. We can also make emulsion into a stable mixture by adding the emulsifying agent.

While agitating butterfat in a container, we get butter up and water below.

Currently in 4th year (Hons) in the Department of Botany, University of Dhaka. Planned to have multiple careers one by one but promised to be with 'Plantlet' as long as it's primary stage remains unfinished. Email: abulaisshomrat@gmail.com. Minimum monthly resolution - Publish (1), Revise (3), Share (5)
Previous Mendelian Inheritance: Part III
Next Solution Types, Plasmolysis and Imbibition