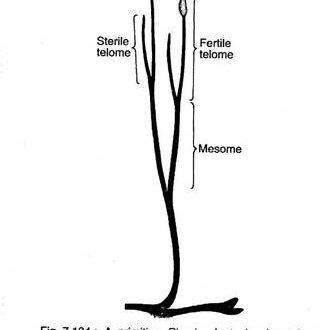 A telome is defined as “branch having no leaves but dichotomous branching at either apex or at base or both” i.e., it is the point of the most distal dichotomy to the tip of a branch. The connecting axes between dichotomies are called mesomes. Functionally, telomes are of two types viz., fertile telome and sterile telome.

Fertile telome: If the ultimate branch is terminated by a sporangium then it is a fertile telome.

Telome theory helps us to understand that

According to Zimmermann, these telomes or telome trusses of primitive Rhynia type of vascu­lar plants have been subjected to certain evolu­tionary processes in varying degrees among the various taxonomic groups.

These evolutionary processes are:

In this process, one of the two dichotomising branches of the primitive axis produced by the apical meristem outgrows or overgrows the other. The larger axis thus produced becomes the stem, while the shorter or overtopped branches represent the beginnings of lateral branches or leaves. Now the earlier dichotomy will be transformed to pseudomonopodial branch.

In this process, the activity of terminal meristem of each telome of the truss becomes suppressed resulting into much shorter branches by decreasing the length of telomes and mesomes. This process is responsible for the formation of microphyllous leaves of the Lycopsida and Sphenopsida as well as the needle-like leaves of conifers.

The process of planation caused the telomes and mesomes of the truss to shift from a three-dimensional pattern (cruciate dichotomy) to a single plane (fan-shaped dichotomy).

The process of infilling with photosynthetic and other tissues between the planated branches is called webbing which have led to the evo­lution of flattened leaf-like structure with a dichotomously veined lamina.

This is an evolutionary process where tangential fusion of mesomes and telomes takes place. The lateral fusion of sterile vegetative telomes and mesomes resulted into complex anasto­mosing vascular systems in stem (e.g., polystelic condition in Selaginella).

The fusion of fertile trusses with their terminal sporangia resulted in the formation of synan­gia of Psilotum. The closed or reticulate venation pattern of some ferns, gymnosperm and many flowering plants are the result of syngenesis of the dichotomising veins of the primitive leaf.

This evolutionary process is caused due to the unequal growth of the tissues on two opposite flanks of the telome.

It has two sub-processes:

In this sub-process the telome bends inward toward an axis. The inward-projecting sporangia on a sporangiophore of Equisetum (Sphenopsida) is the result of this sub-process.


(Need more info from the book of Parihar)

Currently in 4th year (Hons) in the Department of Botany, University of Dhaka. Planned to have multiple careers one by one but promised to be with 'Plantlet' as long as it's primary stage remains unfinished. Email: abulaisshomrat@gmail.com. Minimum monthly resolution - Publish (1), Revise (3), Share (5)
Previous Identification Of Ascomycetes: The Sac Fungi
Next Origin of Pteridophytes