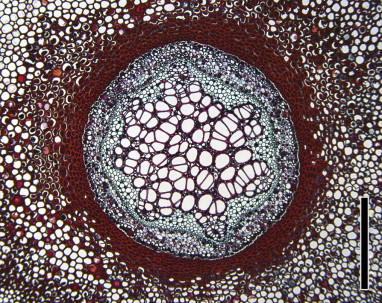 Stelar Types & Its Evolution in Pteridophytes

Stele is the central cylinder or core of vascular tissue in higher plants and Pteridophytes. It consists of xylem, phloem, pericycle and medullary rays and pith if present.

The term stele has been derived from a Greek word meaning rod or column. Van Tieghem and Douliot (1886) introduced this term and put forward the stelar theory. The theory suggests that the cortex and the stele are the two fundamental parts of a shoot system. Both these components (stele and cortex) separated by endodermis.

Tieghem and Duoliot recognized only three types of steles. They also thought that the monostelic shoot were rare in comparison of polystelic shoots.

But now it is an established fact that most shoots are monostelic and polystelic condition rarely occurs. The stele of the stem remains connected with that of leaf by a vascular connection known as the leaf supply.

There are several types of stele found in pteridophytes which are:

Jeffrey (1898), for the first time pointed out the stelar theory from the point of view of the phylogeny. According to him, the primitive type of stele is protostele.

In protostele, the vascular tissue is a solid mass and the central core of the xylem is completely surrounded by the strand of phloem. This is the most primitive and simplest type of stele.

There are five forms of protostele

This is the most primitive type of protostele. Here the central solid smooth core of xylem remains surrounded by uniform layers of phloem (e.g., in Selaginella spp., Gleichenia, Lycopodium).

This is the modification of the haplostele and somewhat more advanced in having the central xylem core with radiating ribs or arms (e.g., in Psilotum spp., Asteroxylon, Lycopodium serratum).

This is the most advanced type of protostele. Here the central core of xylem is divided into number of plates arranged parallel to each other. The phloem alternates the xylem (e.g., in Lycopodium clavatum). 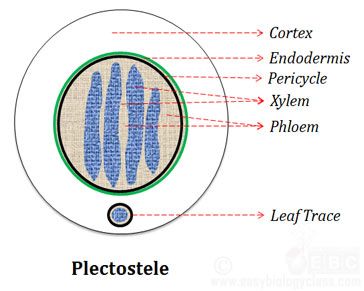 Xylem is divided into several units or groups. Each xylem units are scatteredly arranged inside the ground mass of phloem. Example: Lycopodium cernuum.

Here the xylem elements (i.e., tracheids) are mixed with the small patches of parenchymatous cells of the pith. This type is found in primitive fossils and living ferns. They are treated to be the transitional types in between true protosteles on the one hand and siphonosteles on the other (e.g., in Hymenophyllum demissum, Lepidodendron selaginoides etc.).

This is the modification of protostele. A stele in which the protostele is medullated or with pith at the centre is known as siphonostele. Such stele contains a tubular vascular region and a parenchymatous central region i.e the central core of pith is surrounded by the xylem.

There are different views among the scientists regarding the origin of siphonostele. But they all agreed that, the siphonostele is originated from protostele by formation of pith in the center. Here, the centrally placed xylem core is replaced with parenchymatous pith.

Different stages of changing protostele to siphonostele can be observed in the T.S at different levels in Gleichenia, Osmunda and Anemia.

There are two views regarding the origin of pith in the siphonostele.

According to this theory, the pith is formed as a result of the invasion of cortical parenchymatous cells into the stele. The invasion of pith occurs through the leaf gap or branch gap.

Thus pith and cortex are homogeneous structures according to this theory.

This theory is not accepted by most of the authors since in many pteridophytes there is stele without leaf gaps but having siphonostele.

According to the theory proposed by Boodle (1901), and Gwynne Vaughan, the siphonostele has been evolved from the protostele by a transformation of the inner vascular tissue into parenchyma.

A siphonostele may be of the following types

In this type of siphonostele, the pith is surrounded by concentric xylem cylinder and next to xylem the concentric phloem cylinder.

(a) Ectophloic: Xylem is surrounded by only on the outer side by phloem. E.g. in Osmunda.

(b) Amphiphloic: In center, pith is found. Xylem is surrounded on both sides by phloem. E.g. Marsilea rhizome.

Solenostele that is broken into a network of separate vascular strands are called dictyostele. This breaking up of stelar core is due to the presence of large number of leaf gaps.

This type of stelar organization is the most complex one amongst all vascular cryptogams (pteridophytes). Such type of steles are always siphonostelic in structure.

According to Brebner (1902), there is one more modification of the siphonostele known as eustele. Here the vascular system consists of a ring of collateral or bicollateral vascular bundles situated on the periphery of the pith. The example of this type is internode of Equisetum.

More than one stele in the axis of pteridophytes is present known as polystele. It is a type that must have derived from protostele because each such stele shows protostelic condition. In Selaginella kraussiana generally two stele present. But in Selaginella laevigata as many as 16 steles are present.

Currently in 4th year (Hons) in the Department of Botany, University of Dhaka. Planned to have multiple careers one by one but promised to be with 'Plantlet' as long as it's primary stage remains unfinished. Email: abulaisshomrat@gmail.com. Minimum monthly resolution - Publish (1), Revise (3), Share (5)
Previous Introduction to Pteridophyta
Next Psilotum: The Whisk Fern

How can one get scholarships to go study in South Korea for Higher studies.
And yes…your content is wonderful…so useful..thank you so much 🤗😄 Good job 👏 👍