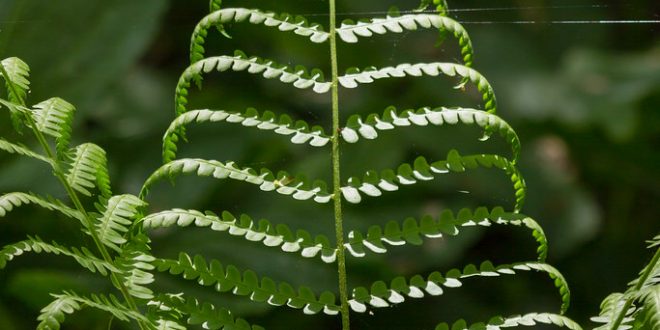 A wood fern grows on the property of Nick Carter, a retired Maryland biologist, in Greensboro, Md., on May 13, 2014. For roughly 50 years, Carter has owned 33 acres of land featuring forest and wetlands on Marylands Eastern Shore. (Photo by Steve Droter/Chesapeake Bay Program)

However, this distinction became invalid due to the discovery of seed-bearing fossil plants (Cycadofilicales). Sinnott (1935), therefore, introduced a new term Tracheophyta for a division that possesses sporophytes with well-developed vascular tissue.

According to recommendations of I.C.B.N. (1952), the name of the division should end in the suffix-phyta, of a sub-division in-phytina and a class in -opsida.

On this basis Wardlaw (1955) divided the Pteridophytes into four divisions:

On the basis of their anatomy Jeffrey in 1902 divided the vascular plants into two types or ‘stocks’. He included ferns, gymnosperms, and angiosperms in a ‘stock’ known as Pteropsida, and lycopods and horsetails in another ‘stock’ known as Lycopsida. Jeffrey however could not give the names of divisions or sub-divisions to these stocks.

Scott in 1923 ranked them as divisions. He segregated the horsetails as a separate division, the Sphenopsida.

According to Eames (1936), Tippo (1942), and others there is a single division, the Trachaeophyta consisting of four subdivisions-1. Psilopsida, 2. Lycopsida, 3. Sphenopsida and 4. Pteropsida.

According to Smith (1955), the classification of the pteridophytes is as follows:

In the so-called modern system of classification by Fuller and Tippo (1954), pteridophytes are included in the phylum Tracheophyta which is divided into four sub-phylum.

The pteridophytes in the older systems are therefore restricted up to the subphylum Psiolpsida, Lycopsida, Sphenopsida, and a class Filicinae of the subphylum Pteropsida in the modern classification.

Currently in 4th year (Hons) in the Department of Botany, University of Dhaka. Planned to have multiple careers one by one but promised to be with 'Plantlet' as long as it's primary stage remains unfinished. Email: abulaisshomrat@gmail.com. Minimum monthly resolution - Publish (1), Revise (3), Share (5)
Previous Origin of Pteridophytes
Next Introduction to Pteridophyta