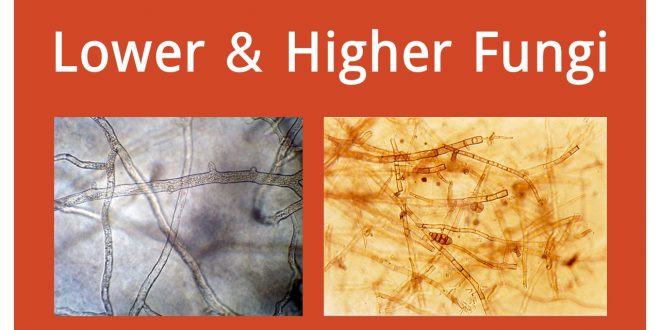 Image source: Given in the description of the article. Partially modified by the author.

Biologists use the term fungus to include eukaryotic, spore-bearing, achlorophyllous organisms that generally reproduce sexually and asexually. They are usually made up of filamentous, branched somatic structures which are typically surrounded by cell walls containing chitin or cellulose, or both of these substances.

The fungi originated as a distinctive group of unicellular eukaryotes in the Precambrian period (4,600 mya – 541 (+/- 1) mya). Recent estimates of the origin of the fungal kingdom based on the analysis of molecular clocks range from 760 million years ago to 1.06 billion years ago. The reliability of date estimates based on molecular clocks is dependent upon calibration points derived from the fossil record, which is far from satisfying for the fungi. The oldest unambiguous fossils of fungi are described from Lower Devonian Rhynie chert (400 million years old). These fossils show spectacular preservation and include chytrid sporangia and zoospores, zygomycete sporangia, and ascomycete fruit bodies.

The organisms termed informally as fungus (pl. fungi) are included in the formal and recognized kingdom Fungi, in the classification provided by Whittaker (1969).

Fungal systematics and classifications are based on different studies including its genetics, sexual mechanisms, biochemistry, morphology (structures & ultra-structures) etc. Considering that, different schools of scientists classify organisms based on different characters and criteria, the fungal classification also poses the same debate and confusion. Besides, over time and with advancement of knowledge in Mycology, especially due to progress of molecular genetic techniques in 1980s, some of the classification schemes considered important before have also become obsolete.

So, the taxonomy of the fungi is in continuous flux, and opinions differ about the value of competing schemes of classification.

Until the 1980s, the taxonomy of fungi was based mainly on light microscopic examination of typical morphological features, giving rise to classification schemes which are now known to be unnatural. Examples of traditional taxonomic features include the presence or absence of septa in hyphae, fine details of the type, formation and release mechanisms of spores (e.g. Kendrick, 1971), or aspects of the biology and ecology of fungi.

Useful ultrastructural details, provided by transmission electron microscopy, concern the appearance of mitochondria, properties of the septal pore, details of the cell wall during spore formation or germination, or the arrangement of secretory vesicles in the apex of growing hyphae.

Biochemical methods have also made valuable contributions, especially in characterizing higher taxonomic levels. Examples include the chemical composition of the cell wall (Table 1.1), alternative pathways of lysine biosynthesis (see p. 67), the occurrence of pigments (Gill & Steglich, 1987) and the types and amounts of sugars or polyols (Pfyffer et al., 1986; Rast & Pfyffer, 1989).

Hypha (pl. hyphae; Gr. hyphe = web) is the unit of structure of most fungi. It is a tubular filament that elongate by apical growth.

Hyphae are generally quite uniform in different taxonomic groups of fungi. One of the few features of distinction that they do offer is the presence or absence of cross-walls or septa in the hypha dividing the whole structure into different compartments or cells.

Here, in this article, the fungi are classified based on light microscopic observation of the septum in hyphae (presence or absence), its fine details (e.g. if dikaryotic phases are seen), formation & release mechanism of spores. Based on them, the two fungi are:

The lower fungi comprise the simplest and the primitive group of fungi which lack septum in the hyphae and primarily reproduce by sporangiospores. It is an informal group that lack any taxonomic position.

History: Early philosophers classified matter into three Kingdoms: Animal, Vegetable, and Mineral. Fungi were placed in the Vegetable Kingdom because of certain similarities to plants such as their lack of mobility, absorptive nutrition, and reproduction by spores. Indeed, it was at one time thought that fungi had evolved from algae by loss of photosynthetic pigmentation.

This was indicated by the use of such taxonomic groups as Phycomycetes, literally meaning ‘algal fungi’. This grouping, approximately synonymous with the loose term ‘lower fungi’, is no longer used because it includes taxa not now thought to be related to each other (chiefly Oomycota, Chytridiomycota, Zygomycota).

Early systems of classification were based on morphological (macroscopic) similarity, but the invention of the light microscope revealed that structures such as fruit bodies which looked alike could be anatomically distinct and reproduce in fundamentally different ways, leading them to be classified apart.

Habitat & Characteristics: The majority of these are aquatic (e.g. Saprolegnia), some are amphibious (e.g. Phytophthora) and some terrestrial (e.g. Rhizopus).

Four of the classes of fungi are included in lower fungi group. They are:

The fungi group with hyphae well-developed, septate, and usually at some stages of development interwoven into a compact tissue especially in the fruiting body (as in ascomycetes, basidiomycetes, and imperfect fungi) is called higher fungi.

Some of the characteristics of higher fungi are:

The higher fungi comprises of the following three classes:

Why do we need to know this classification?

Pioneers of mycology sought to organize fungi into groups with shared characteristics and this morphological approach was successful in carving out the ascomycetes and the basidiomycetes and identifying sub-groups of closely related genera. In some cases, these pre-Darwinian schemes reflected evolutionary relatedness because some broad structural similarities among the fungi do reflect kinship.

In many instances, however, these early investigations lumped unrelated organisms into groups defined by shared characteristics – such as spore color – that held no evolutionary significance. Progress toward a natural classification of the fungi came with advances in microscopy and biochemistry in the twentieth century, but the advent of the polymerase chain reaction and other molecular genetic techniques in the 1980s transformed the study of fungal taxonomy. Since then, many of the traditional groups have been reorganized and renamed and the assignment of thousands of species remains in flux.

But, still today microscopic features are important for recognizing fungi and making an initial identification which can then, if necessary, be backed up by molecular methods. Indeed, the comparison of DNA sequences obtained from fungi is meaningful only if these fungi have previously been characterized and named by conventional methods. It is therefore just as necessary today as it ever was to teach mycology students the art of examining and identifying fungi.

Currently in 4th year (Hons) in the Department of Botany, University of Dhaka. Planned to have multiple careers one by one but promised to be with 'Plantlet' as long as it's primary stage remains unfinished. Email: abulaisshomrat@gmail.com. Minimum monthly resolution - Publish (1), Revise (3), Share (5)
Previous An Introduction to Fungi
Next Fungi: Vegetative Structures & Growth

All fungi related articles are impressive. thanks for this one also